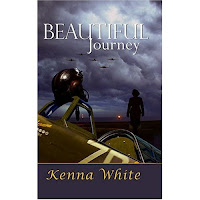 Beautiful Journey follows American pilot Kit Anderson for a brief time as she reaches the end of her contract with the British Air Transport Auxiliary where she is the Flight Lieutenant. Kit joined the war effort in large part to get away from a bad breakup and had planned to forsake her personal life for 18 months to focus on flying. Nope, no romance for her. Until she met Emily Mills, that is.

I enjoyed this book quite a bit. There were a few places where I laughed and even one where a tear or two leaked out. I love the bumbling nature of Emily, who is so far out of her element that I felt bad for her. But she’s a proud, determined woman and doesn’t give up. There were times when the interplay between Kit and Emily reminded me of Lucy and Ricky Ricardo when Lucy had some scheme blow up – except Emily wasn’t scheming, just unlucky.

It was a good romance with good secondary characters and the wartime aviation theme was just one more draw for me. Not that I’m big on airplanes – I hate to fly! – but I really like books that take place during wartime or some other historical setting. And I’ve always been very interested in WWII and enjoy military stories in general. This was my first experience with Ms. White’s work but it won’t be the last.