The Price of Fame by Lynn Ames 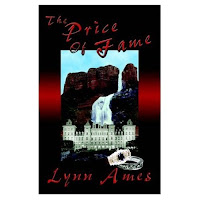 Wow. I’m not much for giving a negative review but sometimes I just have to do it. First off, here’s the blurb on this book, published in 2004:

When local television news anchor Katherine Kyle is thrust into the national spotlight, it sets in motion a chain of events that will change her life forever. Jamison “Jay” Parker is an intensely career-driven Time magazine reporter; she has experienced love once, from afar, and given up on finding it again…That is, until circumstance and an assignment bring her into contact with her past.

Kate and Jay’s lives intertwine, leading them on a journey to love and happiness, until fate and fame threaten to tear them apart. What is the price of fame? For Kate the cost just might be everything. For Jay, the price could be the other half of her soul.
Sounds good, right? I suppose it could have been if it had been written in a completely different way. Granted, this was the author’s first published book but, wow, there was just so much to get in the way of the story, I literally had to fight with myself just to finish it. I even quit at one point, only to feel guilty for not getting to the end where I may have found that it got better. I started reading again a few minutes later – I am an expert at guilting myself into doing things. It didn’t get better. In fact, I thought it got even worse.
The flashbacks throughout the first half or so of the book seemed not only excessive in number but also in detail. They really got in the way of the story progressing and most of them could have either been combined with others or left out completely.
I think the thing that really killed it for me was the voices of the characters, the words they thought and spoke. No one talks like that. No one. It felt to me like they were reciting a badly written script filled with over the top romantic cliches. There were more declarations of everlasting love and devotion in a single chapter than I’ve received in my whole life. Ok, maybe that’s more of a statement on the non-romantic nature of my wife than on the author, but still.
I can’t go into specifics about the majority of my eye rolling and mutterings of “What?!” because it would ruin the story for those of you who still want to read it. But believe me, there were lots of mutterings and my eyes are still sore from the rolling. By the way, I think this book holds the record for the fastest declaration of love and devotion and desire to rent that uhaul.
I read the reviews on Amazon and I swear I read a completely different book from nearly all of the reviewers.
I doubt I’ll be picking up the two sequels to this book but if you have something to share about this one or the sequels, please post it in a comment. This is just my opinion. She wrote a load of books so folks must like them.